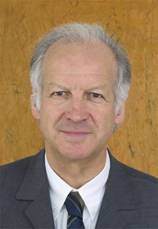 Wilfried Kurz is Professor emeritus of Materials Science and Engineering at the Swiss Federal Institute of Technology Lausanne (EPFL). He received his diploma and doctor’s degree from the University of Leoben, Austria. In 1964 he joined the staff of the Battelle Geneva Research Laboratories, which he left in 1971 as head of the physical metallurgy group to take up a position at the Swiss Federal Institute of Technology Lausanne (EPFL). Until his retirement in 2003, he directed the Laboratory of Physical Metallurgy as well as the Laser Materials Processing Centre. After participating in 1972/73 in the foundation of the Materials Science and Engineering curriculum at EPFL he was twice Head of Department. During 2001-2007 he served as a member of the Executive Committee of FEMS, and during 2004/05 as its president.

His main research activity has involved experimental and theoretical work on the development of microstructure in materials, specifically dendritic, peritectic and eutectic solidification, microsegregation and solid-state transformation kinetics and also on solidification processing such as continuous casting of steel, welding, laser treatment, rapid solidification processing, single crystal casting, directional solidification, and epitaxial single crystal laser repair. Co-author of four books (including "Fundamentals of Solidification" and "Introduction to Materials Science") he has published some 230 papers and patents (ISI highly cited author).

Professor Kurz is a Corresponding Member of the Austrian Academy of Sciences. He is the recipient of the “Hans Malzacher Award” from the Austrian Society for Metallurgy and Materials, the “Bruce Chalmers Award” from The Minerals, Metals & Materials Society (TMS, USA), the “Medaille Guillet Bastien” of Société Française de Métallurgie et de Matériaux, the “Heyn-Denkmünze” of Deutsche Gesellschaft für Materialkunde, the “Luigi Losana Gold Medal” of Associazione Italiana di Metallurgia, “The European Materials Medal” from the Federation of European Materials Societies, the “Albert Sauveur Achievement Award” of ASM International, and the “Chinese National Friendship Award” of the People’s Republic of China. He is also an Honorary Member of the Iron and Steel Institute of Japan.