The Swedish Society for Materials Technology got its present form in the year 1986. In the preceeding years, the society had the name “Svenska metallografförbundet” (roughly, “Swedish Metallographers Society”). According to the constitution of the society, written in the year 1922, the aim of the society was to promote the development of physical metallurgy by means of collaboration between the metallographers of the country and others having their interests in the field. The aim was expected to be fulfilled by organizing meetings/symposia wherein lectures, exchanges of ideas and demonstrations, publications and collaboration with other organisations of similar interests. The society was geographically placed in Stockholm, while the meetings could be held elsewhere.

In early days, most of the metallographers (physical metallurgists) were active in the iron- and steel industries and the microscope was the most important tool. It was realized by the mid 80’s that the most of the physical metallurgists were employed in the “workshop” industries. The normal physical metallurgist had become a material technologist. The work demanded that the material technologist should master a number of other analytical techniques apart from microscopy and must have a sound knowledge of a variety of materials like steel, aluminium alloys, light metals, surface-coated metals, ceramic materials, fibre-strengthened materials, plastics, rubber etc. Thus, with a view to present a better presentation of the interests of the members, the society opted to change the name to “Svenska föreningen för materialteknik”. While the original English name suggested was “Swedish Society for Materials Science” over the years, the word “Science” was replaced by “Technology”.  The aim of the renamed society was to promote the development of materials technology in . Special emphasis was laid on the relationships between processes, structure and properties.  This is illustrated in the figure below: 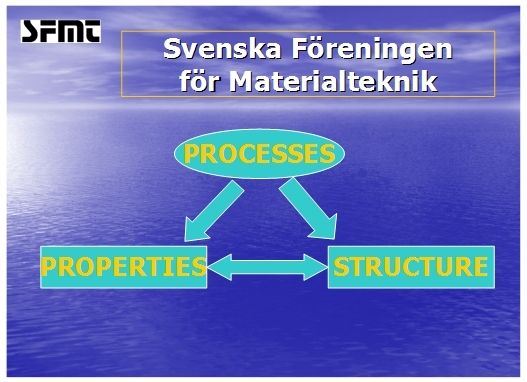 During the later years, increasing attention has been paid to the linking of properties with processes so that the materials can be tailor-made to suit the needs of the end-user. Further, the society has shown a growing interest in the variation of properties when the size factor goes down from “macro” towards “meso”, “micro” and finally end up in “nano” scale. Thus, the scope for the society has expanded significantly over the recent years.

Today the society is a very interesting meeting place for material scientists and engineers from the academia as well as industries.

SFMT is normally active in two meetings/conferences per year one spring meeting including a board meeting and one fall meeting. The location of the meetings is chosen so that all of Sweden is covered geographically and the topics are chosen to satisfy both local and national aspects. The lectures given are presented by invited people from academy and industry. During the last three years two day meetings have been held in Borlänge, Luleå, Karlstad and Gothenburg. The society also is aiming at establishing contacts on an international basis and examples of location of bilateral meetings is Ukraine and Egypt.

The board consists of representatives from Swedish universities and industry active in the field of materials.

The present board has the following members

ASMET - The Austrian Society for Metallurgy and Materials

SNMTS - Society for New Materials and Technologies in Slovakia