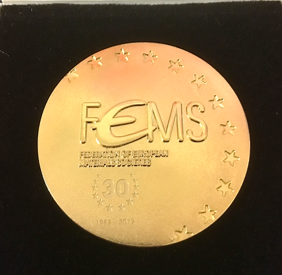 The Medal is presented at the biennial EUROMAT Conference, which is held in odd numbered years.

The Medal is to be awarded to still active materials scientists or engineers for distinguished contributions to Materials Science and Engineering in Europe.

Candidates for the award may be proposed by the

The FEMS Secretariat will publish a call for proposals a year before the next EUROMAT Conference.

Nominations must be submitted to the FEMS Secretariat. Nominations (generally below the age of 60 at the time of proposal) are kept active for three consecutive years. The award shall not include posthumous selections. The nomination package should contain a CV and a list of publications (preferably accompanied by a list of independent citations), and a list of invited lectures. Also, a list of former PhD students and post-docs trained by the nominee should be included, indicating the positions presently held by those younger colleagues. Letters of support from at least three personalities in the field of MSE, familiar with the candidate’s achievements should be included with the nomination. A proposed citation of not more than thirty words should be submitted with the nomination. A nominee should preferably (but not exclusively) have European nationality or have done much of his/her research work at a European university or institute.

Responsibility for the selection of the recipient rests with the Award Selection Committee. The ASC will review nominations and propose one candidate to the Executive Committee (EC) not later than 6 months prior to the presentation of the award.

The recipient should be present at the awards event for appropriate recognition and present a lecture on his research at the EUROMAT Conference. He will be asked to publish a corresponding article in a European Materials Science Journal.

Both the chairman and the two other members of the Awards Selection Committee are appointed by the FEMS Executive Committee for a period of up to four years.