It is important to highlight the importance of this award, since the recognition of excellence in technological innovation and scientific research in the area of ​​Materials is part of the mission of SPM, which welcomes the prestige achieved in the contest, a sign of the very undeniable quality of work that is developing in Portugal and the vitality of SPM.

The SPM Career and Recognition Award, created in 2015, was awarded for the third time.

The MATERIAIS meetings are the most important event of SPM, since it is meant to be the “place” where every 2 years the national and international community involved in research and development in the area of Materials meet. It is intended to be a forum for sharing ideas, to nucleate new projects and collaborations, to educate and, above all, to disseminate to the national and international community the most recent developments in the area.

MATERIAIS directly contributes to the accomplishment of one of the most noble missions of the SPM, which is to be the VOICE of Materials in Portugal.

Allow me to make a brief historical review of MATERIAIS, which has always been under the patrimony of theSPM.

The first MATERIAIS, MATERIAIS '83 (the 1st SPM Congress), took place at LNEC in Lisbon. After this initial event, every 2 years without interruption, a MATERIAIS was held, always in a different place in the country and with a different organisation.

Throughout these years and events, it is worth highlighting that in 2001, with MATERIAIS 2001 that took place in Coimbra, what was initially a national event became an international congress, which has continued up to today.

More recently, and within the process of the internationalisation of the SPM, the first Iberian meeting of the Portuguese and Spanish Societies of Materials took place in Salamanca in 2018.

By agreement between the two societies, the Iberian event will occur every 3 years, alternately in Portugal and Spain, and the second of these Iberian events will take place in 2021 in Lisbon, during MATERIAIS 2021.

Under the theme MATERIALS FOR A BETTER LIFE, MATERIAIS 2019 features a wide range of prominent speakers who will address the latest developments in materials, which will undoubtedly contribute to the achievement of the 17 GOALS of The Sustainable Development Agenda, ensuring the promotion of prosperity for all while protecting the planet.

The SPM is very grateful to have another successful MATERIAIS congress this year, and thanks the organisers, chairs and committees for their dedication to this event, hard work and enthusiasm, which insures a great success.

The SPM expresses gratitude to the Sponsors; their contribution and presence are essential to make MATERIAIS happen.

Finally, the SPM thanks all the speakers and delegates for their presence, and for making MATERIAIS 2019 a success

The president of the SPM 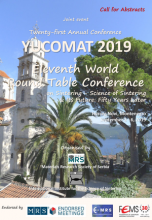 Due to great interest in participation at the YUCOMAT & WRTCS 2019 conference, the deadline for abstract submission has been extended to Friday, May 31, 2019. END_OF_DOCUMENT_TOKEN_TO_BE_REPLACED

Posted by Materials Research Society of Serbia on 3 May 2019

FEMS discusses international collaboration and materials research in Europe and beyond 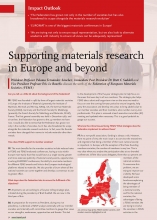 The journal Science Impact recently published 2 interviews with the FEMS president, Paloma Fernández Sánchez and with immediate past president, Brett Suddell on the subjects of international collaboration and supporting materials research in Europe and beyond. END_OF_DOCUMENT_TOKEN_TO_BE_REPLACED

Educational Olympiad "The route from the Macroworld to the Nanoworld" 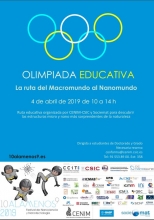 Within the activities organized by the CSIC in the V Festival of Nanoscience and Nanotechnology, SOCIEMAT collaborated again with the CENIM this year, organizing the Educational Olympiad "The route from the Macroworld to the Nanoworld" that was held on April 4 in the CENIM CSIC, with different games and activities for the students... END_OF_DOCUMENT_TOKEN_TO_BE_REPLACED
Posted by SOCIEMAT - Sociedad Española de Materiales on 5 April 2019

The deadline for the early registration has been extended to April 15th, 2019. You have time to register at this special registration fee price. END_OF_DOCUMENT_TOKEN_TO_BE_REPLACED 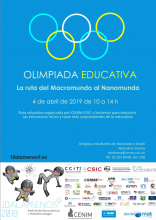 The second Scientific Olympiad, organized by SOCIEMAT and CENIM will take place on April the 4th, 2019, in the framework of the activities of the IV Festival of Nanoscience and Nanotechnology. Under the motto "Route from the Macroworld to the Nanoworld", the students will discover the most amazing micro and nano structures in the natural world.... END_OF_DOCUMENT_TOKEN_TO_BE_REPLACED

The Faculty of Mechanical Engineering at Ruhr-Universität Bochum will be awarding a W1 Junior-Professorship in Materials Informatics and Data Sciences at the Interdisciplinary Centre for Advanced Materials Simulation (ICAMS). Pending a positive tenure evaluation, the successful candidate will be subsequently be appointed to a permanent position as professor (W2).

The Ruhr Universität Bochum (RUB) is one of the leading research universities in Germany. As a reform-oriented campus university, it houses the full spectrum of expertise in the main branches of science and research under one roof. Working in an environment that promotes a dynamic exchange between individual academic disciplines and their cultures, researchers and students alike benefit from the opportunities of interdisciplinary collaboration END_OF_DOCUMENT_TOKEN_TO_BE_REPLACED 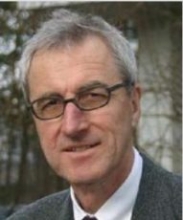 FEMS joins the DGM (German Materials Society) in mourning the loss of a very eminent and successful scientist and highly esteemed colleague and will honour his memory.

The 18th ECASIA will be held from 15th to 20th September 2019 in Dresden, Germany - also called the “Florence of the North”.

The ECASIA’19 conference will be organized in Dresden initiated by the Institute of Solid State and Materials Research (IFW Dresden) in cooperation with the Technical University Dresden (TUD) and other academic and industrial partners of the region. We hope to continue the conference series in the “spirit of ECASIA” to bring together scientists from universities, industry and instrument suppliers, to bridge the gap between fundamental and applied research in... END_OF_DOCUMENT_TOKEN_TO_BE_REPLACED